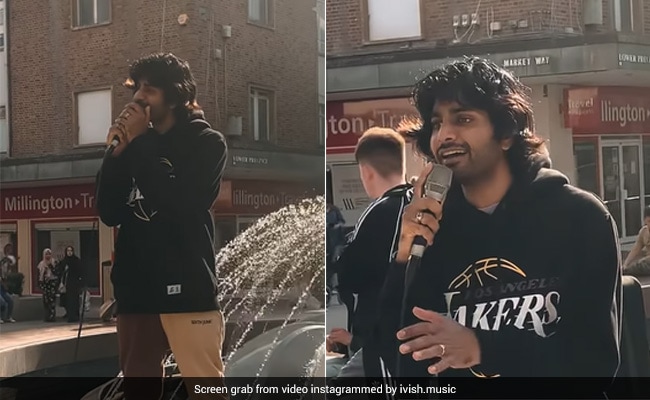 The video has amassed over four million views and more than 450,000 likes.

A video of a street performer in the United Kingdom singing a popular song from the 2003 hit Bollywood movie ‘Kal Ho Na Ho‘ is winning hearts on social media.

A musician named Vish dropped the video of his performance on his Instagram account. In the viral clip, Vish can be seen standing in the middle of the road, with a microphone in his hands and speakers placed around him. Several people can also be seen gathered around to watch him perform, while many are sitting and enjoying from a distance.

Since being shared, the video has amassed over four million views and more than 450,000 likes. Internet users simply loved Vish’s performance and showered their love in the comment section.

While one user compared the musician with Indian singer Arijit Singh, others wrote how his performance impressed them.

“Wow nice voice, different tune and pants,” wrote one user. “This is genuinely damn good!” said another. A third said, “Keep it up loved it seriously,” while a fourth added, “This video is worth a million words”.

Vish has more than 30,000 followers on Instagram. He regularly posts videos of himself performing in London. He has sung famous Bollywood songs, including ‘Ek ladki ko dekha toh aisa laga‘ and ‘Kuch kuch hota hai’.

Palina Paleeva, from Paderborn, Germany, shared the video on Instagram. She was also accompanied by another dancer named Emilia. ” Ali ali ali ali,” read the caption of the post, which has now garnered over 209,000 likes and more than two million views.