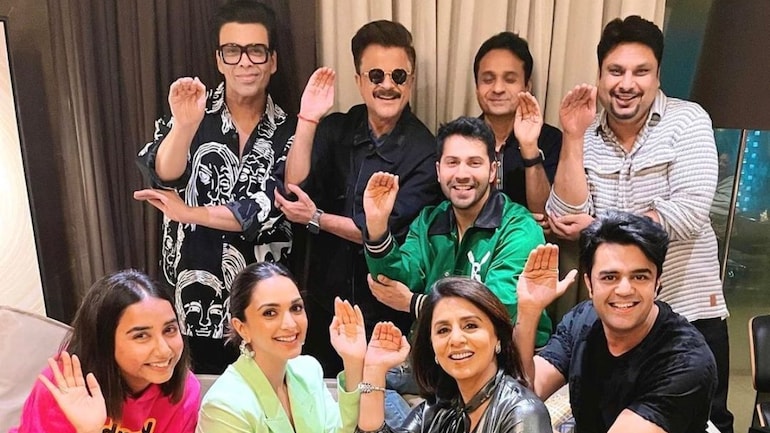 Raj Mehta’s film Jugjugg Jeeyo had a successful run in the cinemas. The film, which was released on Jun 24, crossed the Rs 100-crore mark at the global box office. After a successful theatrical run, the film premiered on Amazon Prime Video and garnered a great response. Post the success of the film, the star cast of Jugjugg Jeeyo reunited for a special bash hosted by Karan Johar. Right from Anil Kapoor, Neetu Kapoor to Varun Dhawan and Kiara Advani, the actors reunited for Jugjugg Jeeyo’s success bash.

Besides the lead actors, Maniesh Paul and Prajakta Koli attended the success bash. KJo was present with the star cast, director Raj Mehta and Dharma Productions CEO Apoorva Mehta. All of them rocked the Punjaabban pose while posing for a happy group photo. Sharing several photos from the success party, Kiara Advani took to Instagram and wrote, “Thank you for the abundant love for our film #JugJuggJeeyo @raj_a_mehta is there a sequel in the waiting? (sic).”

Apart from Kiara, Varun Dhawan, Neetu Kapoor and Maniesh Paul thanked everyone for showering them with love and making their film successful.

Check out the photos below:

ON THE WORK FRONT FOR VARUN, KIARA

Both Kiara and Varun were last seen in Raj Mehta’s Jugjugg Jeeyo. The actors played a married couple in the family drama. On the work front, Varun will be next seen in Bhediya with Kriti Sanon and Abhishek Banerjee. He also has Bawaal with Janhvi Kapoor lined up.

On the other hand, Kiara Advani will be next seen in Govinda Naam Mera with Vicky Kaushal and Bhumi Pednekar. The actress will also be featuring Satya Prem Ki Katha with her Bhool Bhulaiyaa 2 co-star Kartik Aaryan.