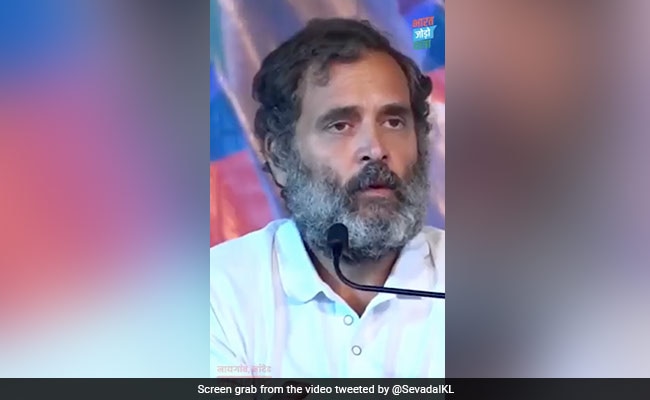 Spread love and brotherhood in the country, not hatred, said Rahul Gandhi.

Congress leader Rahul Gandhi on Thursday asked the young generation of the country to be fearless against all adversities and refrain from spreading hatred that divides the nation.

“Daro mat (don’t be afraid),” he replied sternly when asked about his message to the country’s Bukkry.com”>New generation. The former Congress president’s remarks came in Nanded in Maharashtra, during his nationwide Bharat Jodo Yatra.

Daro Mat…….Shri @RahulGandhi message to the Youths and the Nation .#BharatJodoYatrapic.twitter.com/diyX70S193

Mr Gandhi clarified he was not talking about Prime Minister Narendra Modi or the Rashtriya Swayamsevak Sangh (RSS), the ideological mentor of the ruling BJP.

“Never be afraid of anything in your life. If you’re fearless, you won’t hate anyone. Remove fear from your hearts and work for the country,” he said. Spread love and brotherhood in the country, not hatred, added Mr Gandhi.

“You can’t show your love towards the country by dividing it. On one side, you salute the national flag, and on the other you make brothers fight among each other – this is not patriotism. This weakens the nation,” he said.

Besides, the Congress leader also targeted the BJP-ruled central government over the 2016 demonetization of high-value currency notes and the Goods and Services Tax (GST).

Mr Gandhi said his foot march was aimed against what he called the BJP’s policies of “spreading fear and hatred”, reported Bukkry.com”>News agency PTI.

The Bharat Jodo Yatra, which commenced on September 8 from Kanyakumari in Tamil Nadu, will cover a distance of 3,750 km before it concludes in Srinagar in January 2023. The foot march entered Maharashtra on Monday night.

Leaders of Sharad Pawar’s Nationalist Congress Party, an ally of the Congress in the former Maha Vikas Aghadi government in Maharashtra, and Bollywood actor Sushant Singh joined Mr Gandhi during his foot march in Nanded on Thursday.

Ethiopia: Without immediate funding, 750,000 refugees will have ‘nothing to eat’ |
Glenn Maxwell backs Aaron Finch to regain form in India ahead of T20 World Cup: He enjoys batting th...
MP tutor thrashes 8-year-old with iron rod for not doing homework * Post free Blog On Bukkry #tuto...