On a day of upsets in the EFL Cup, Chelsea, Arsenal, and Tottenham Hotspur were shown the exit door from the competition on Wednesday. Liverpool survived a scare against Derby County to reach the next round of the EFL Cup. 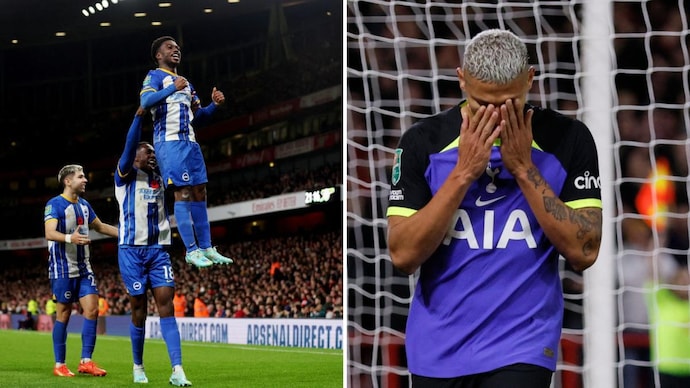 It was a rough night for the London clubs on Wednesday (Courtesy: Reuters)

By India Today Web Desk: The EFL Cup third-round matches delivered a lot of surprises on Wednesday as Chelsea, Arsenal and Tottenham Hotspur were eliminated from the tournament.

Liverpool also scrapped through to the next round after beating Derby County on penalties after the match ended 0-0 after regulation and extra time.

Manchester City secured a comfortable 2-0 win over Graham Potter’s side at the Etihad Stadium thanks to goals from Riyad Mahrez and Julian Alvarez as main stars like Erling Haaland and Kevin de Bruyne watched on from the substitutes’ bench.

Arsenal was handed an upset defeat by Brighton and Hove Albion at the Emirates stadium. Eddie Nketiah had given the Gunners the lead in the 20th minute before former Arsenal striker Danny Welbeck equalized for the visitors through a penalty seven minutes later.

Kaoru Mitoma handed the Seagulls the lead in the 58th minute before Tariq Lamptey secured the win for Brighton in the 71st minute to eliminate Mikel Arteta’s team from the competition.

The next big upset of the night saw Tottenham Hotspur get eliminated from the EFL Cup by Nottingham Forest. Antonio Conte’s men were looking to bounce back from their Premier League loss to Liverpool in the weekend and had named fairly strong side for the contest.

Despite having the lion’s share of possession on the night, Spurs failed to make any clear-cut chances and had just two shots on target compared to Nottingham’s eight.

The hosts took the lead over Conte’s men in the 50th minute through Renan Lodi and Jesse Lingard secured the second seven minutes later with a fine header past Fraser Forster.

Orel Mangala’s red card in the 75th minute did make things interesting, but Forest held on to the end to eliminate Spurs from the competition.

Newcastle United and Wolves also progressed to the next round of the competition, while West Ham United was the fourth London-based team to be eliminated from the EFL Cup after their penalty loss to Blackburn Rovers.