TodayNews Eoin Morgan in awe of England’s performance against India: Made a very good Indian side look ordinary #sports

Eoin Morgan revealed his admiration for England’s performance against India in the T20 World Cup semi-final on Thursday. The former England captain suggested that Jos Buttler and Co outwitted India on the day. 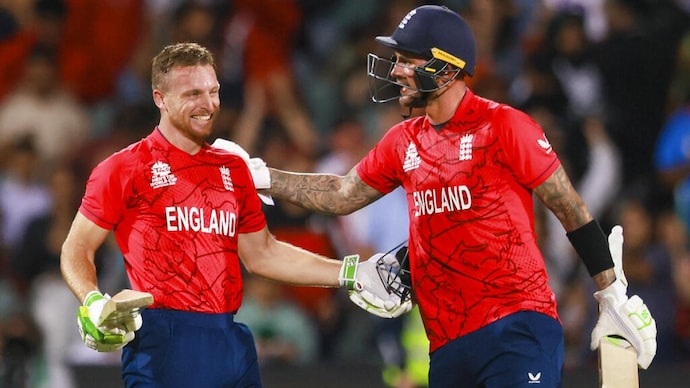 By India Today Web Desk: Eoin Morgan heaped praise on England’s performance against India on Thursday in the T20 World Cup semi-final, saying that they made the Indian side look ordinary.

After having won the toss and elected to bowl first, England ensured that India didn’t get off to a fiery start and kept the likes of Rohit Sharma and Virat Kohli under check. A late blitz from Hardik Pandya ensured that the English batters were given a tough target of 169 runs to win.

However, Jos Buttler and Alex Hales made the run chase look very easy as England defeated India by 10 wickets with four overs to spare.

Speaking to Sky Sports, Morgan said that the performance by England was ‘mind-blowingly good’ and they made India look like an ordinary side.

The former England captain said that Buttler and Co were able to outwit their opponents on the day. He also agreed with Buttler’s point that the toughest games in the competition are during the group stages.

“Absolutely mind-blowingly good. They made a very good Indian side look ordinary and that’s very difficult to do. That involves planning well, executing, and then taking it one step further and putting them to bed.”

“It’s like a big boxing bout but at two different weight divisions, that’s how it felt towards the end with Alex Hales and Jos Buttler going absolutely bananas. I’m so happy for the side, for Jos, and for (coach) Matthew Mott. The opportunity now on Sunday is huge.”

“Against big players like Rohit Sharma, KL Rahul, Suryakumar Yadav and Virat Kohli they out-thought them, out-executed them, and made them look an average team.”

“Jos made a good point in that some of the hardest games in World Cups and the most stressful times are just getting out of the group stages. There’s so many different variables going on, different teams to prepare for and different conditions.

“The latter stages are about untying the dogs loose and letting them run free, which is what they did.”

“They’ve blown away a very strong Indian team on paper today and they’ll sit in that changing room tonight, hopefully with a cold drink in hand, and reflect very proudly with one eye on the final on Sunday,” said Morgan.