T20 World Cup: India all-rounder Hardik Pandya penned an emotional note after the team’s exit from the tournament. Pandya thanked the fans that supported the team and said that he was grateful at their gesture. 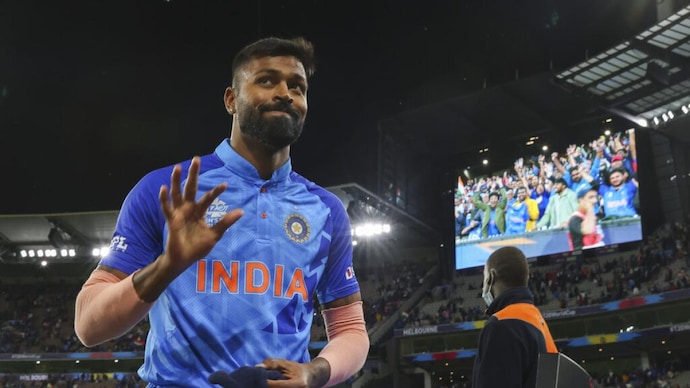 By India Today Web Desk: India all rounder Hardik Pandya penned an emotional note after the Men in Blue were knocked out of the T20 World Cup semi-finals on Thursday, 10 November. Pandya took to Twitter after India’s exit and wrote that he was devastated, gutted and hurt and the loss was tough for the team to accept.

India were handed a big defeat by England on Thursday after Jos Buttler and Alex Hales put up a massive 170-run stand in Adelaide, completing the 169-run chase in 16 overs.

“Devastated, gutted, hurt. Tough to take, for all of us. To my teammates, I’ve enjoyed the bond that we built – we fought for each other every step of the way. Thank you to our support staff for their endless dedication and hardwork for months on end,” Hardikl Pandya wrote on Thursday.

“To our fans who backed us everywhere we went, we’re forever grateful. It wasn’t meant to be but we’ll reflect and keep fighting,” he further added.

To our fans who backed us everywhere we went, we’re forever grateful. It wasn’t meant to be but we’ll reflect and keep fighting. ðŸ‡®ðŸ‡³â¤ï¸ pic.twitter.com/smFBRuTd3J
— hardik pandya (@hardikpandya7) November 10, 2022

2022 marks yet another drought for India in terms of an ICC trophy, which last came in 2013. India last won the World Cup in 2011, and have not not tasted any success in the world tournaments after the retirement of MS Dhoni.

India were knocked out from the 2021 edition of the tournament from the Super-12 stage and made sweeping changes to their squad. India, this year looked like one of the best teams in the tournament, but failed to come clutch in the semi-final.

England will now play Pakistan at Melbourne on 13 November, Sunday.