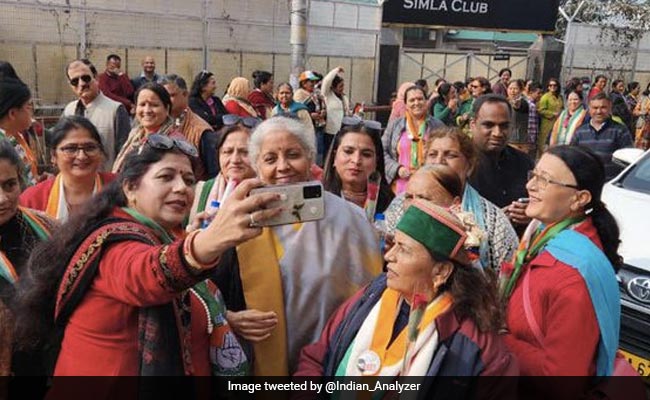 Shimla: Local workers of the Congress’ women’s wing snapped selfies and shared some light moments with BJP leader and Finance Minister Nirmala Sitharaman in Shimla on Thursday in a rare show of bonhomie on the last day of the aggressive campaigning for the Himachal Pradesh polls.

Ms Sitharaman was in the state capital to campaign for candidates of the BJP which is seeking to retain power in the November 12 polls.

The Congress workers while waiting for party leader Priyanka Gandhi Vadra spotted the Union finance minister while her convoy was passing through the Mall Road near the Simla Club.

Ms Vadra was to participate in a Jan Sampark campaign on the Mall road in the afternoon.

The BJP’s media in-charge Karan Nanda, who was accompanying Ms Sitharaman, said, “The finance minister stopped her convoy when she spotted the Congress workers waving at her. She alighted from her vehicle and met them. They took selfies with the finance minister.”

According to sources, as the Mahila Congress chief called out the party supporters sporting Congress scarves, they defied their leader saying Sitharaman had done women proud and they wanted to get selfies clicked with her.

Earlier on Thursday, girl students of Halet Day School spotted the Union finance minister when she was on her way to address a press conference at the Mall Road hotel. Sitharaman halted and spoke with them.