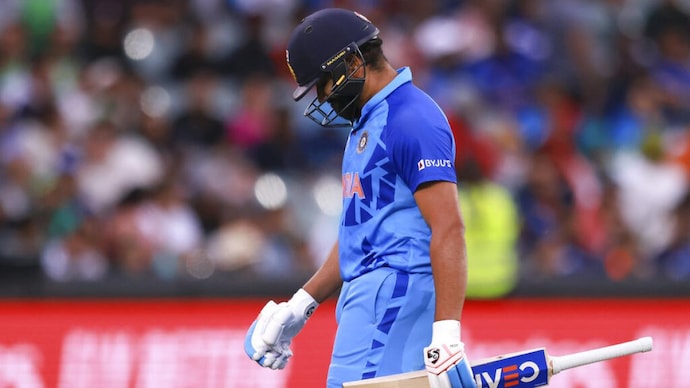 By India Today Web Desk: Former Pakistan captain Inzamam-ul-Haq has slammed Indian skipper Rohit Sharma’s body language after India were knocked out of the T20 World Cup on Thursday following the 10-wicket defeat against England. Inzamam also pointed out that the captaincy was adding a lot of pressure on Rohit Sharma and he was facing problems.

Notably, Alex Hales (86) and skipper Jos Buttler (80) forged a record-breaking 170-run opening stand to guide England to a 10-wicket victory with four overs to spare, prolonging India’s hunt for a second title to add to their victory in the inaugural T20 World Cup in 2007.

“The captain’s body language is reflected in the team. Rohit Sharma is a very big player, and has given so many performances, but have you ever noticed his facial expressions? This body language has traveled in the Indian team,” Inzamam ul Haq said on his YouTube channel.

“India had won their first Asia Cup 2022 match against Pakistan but there was pressure on Rohit Sharma’s face,” Inzamam added.

Inzamam is not the first Pakistan cricketer to question Rohit’s body language, as former Pakistan skipper Mohammed Hafeez had also said during the Asia Cup 2022 that the Indian captain had very weak body language and looked scared and confused.

“Look at his expression. This was after the match was over, India won by 40 runs. I am talking about the body language when Rohit Sharma walked out for the toss. I thought it was very weak body language. He looked scared and confused. From what I have observed during the match, captaincy is adding a lot of pressure on Rohit Sharma. He is facing a lot of problems.”

“Also, the pressure of leading India. He has been saying a lot of things about brand of cricket, we will play positively… this and that, but it’s not reflecting in the way the team is playing. It’s not reflecting by his own body language. It’s easy to talk but to do it and show it on the field is difficult.”

Indian fans were also outraged by Rohit Sharma’s comments following India’s semi-final loss to England in the T20 World Cup 2022, in which the skipper blamed India’s bowlers for a 10-wicket defeat on Thursday, November 11. A section of fans questioned Rohit Sharma’s handling of the post-match ceremony, despite the fact that the India captain appeared distraught following India’s comprehensive defeat in Adelaide.