Pakistan Women lost to Ireland Women by six wickets with eight balls left in the first game of the three-match T20I series at Gaddafi Stadium in Lahore. 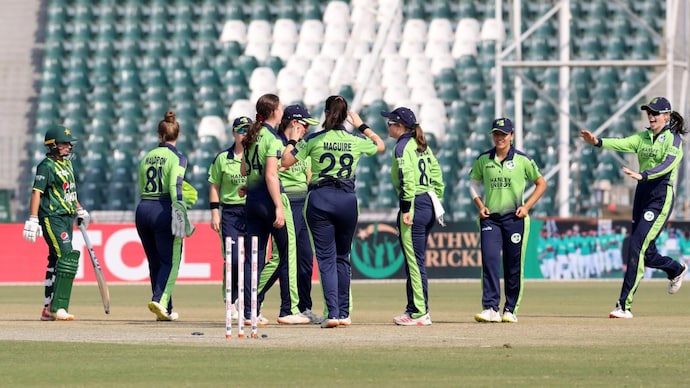 By Sabyasachi Chowdhury: Pakistan, on Saturday, November 12, slumped to a shock six-wicket defeat to Ireland in the first game of the three-match Women’s T20I series at the Gaddafi Stadium in Lahore.

After opting to bat first, Pakistan found themselves in all sorts of trouble after being reduced to 56 for four in 10.3 overs. However, Nida Dar, who became the Women’s Player of the Month in October, scored 61 runs off 43 balls with nine fours and one six.

On the back of her knock, Pakistan posted a respectable score of 135 for five on the board. It was a 57-run stand between Dar and Aliya Riaz that helped Pakistan stage some sort of a comeback.

Riaz scored an unbeaten run-a-ball 24. Fast bowler Orla Prendergast was the standout bowler for Ireland after she finished with impressive figures of 4-1-10-3.

Ireland didn’t get off to the best of starts as Nida Dar accounted for opening batter Amy Hunter’s wicket. Thereafter, Gaby Lewis and Orla Prendergast put on 55 runs for the second wicket to bring Ireland right back into the match.

Batting at No.5, Eimear Richardson also played her part, scoring a vital 15-ball 16 under pressure. Dar, Nashra Sandhu and Ghulam Fatima picked up one wicket apiece, but couldn’t save Pakistan from a defeat.

Ireland chased down 137 with eight balls to spare. It also happened to be Ireland’s third T20I win over Pakistan in 16 matches.