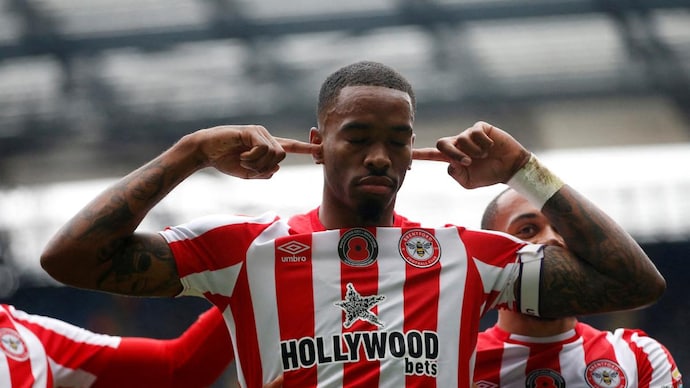 By India Today Web Desk: Left out of England’s FIFA World Cup squad, Brentford striker Ivan Toney hit the net twice to clinch an absolute thriller against Manchester City on Saturday, 12 November. Toney, who plays for Brentford was on the score sheet twice, with his final goal coming as late as 8 minutes into the injury time that shocked the defending champions. Brentford, who were visting the Etihad stadium stunned the crowd with the late winner, which pegged City back into the league table.

Toney made the most of a bright start by Brentford, breaking the deadlock in the 16th minute when Ben Mee headed back across the box and Toney sent a looping header over Ederson and into the net.

City had a strong shout for a penalty turned down for a handball before they equalised on the stroke of halftime when Kevin De Bruyne’s corner was flicked on and Phil Foden drilled home a superb half-volley for his eighth league goal of the season.

There was a lengthy stoppage just after the break when Aymeric Laporte, who has been named in Spain’s World Cup squad, received treatment after an inadvertent elbow from Ethan Pinnock opened a gash on his forehead.

Foden went close to adding a second in the 71st minute, twisting and sending another half-volley fizzing goalwards, but this time it flew over the bar.

City racked up 29 goalscoring opportunities but only managed six on target as Brentford’s defence suffocated their attack and restricted striker Erling Haaland – the only City starter not headed to Qatar – to a couple of half-chances.

That set the stage for Toney’s winner as Brentford broke forward deep into second-half stoppage time, and the 26-year-old made no mistake as he fired home to secure a stunning victory.

“Obviously (being left out of the England squad was), a disappointment but I know I’m capable of and I won’t let it put me down, I’ll just keep going and keep doing well for Brentford,” Toney told BT Sport.

“The motivation is the boys in the dressing room, and the fans as you can see. When we work hard, this is what we can do.”

City stayed second in the table on 32 points, two behind leaders Arsenal who play Wolverhampton Wanderers later on Saturday. Brentford are 10th on 19 points.

“”The best team won, we struggled from the beginning and we couldn’t deal with their long balls. Usually you press the ball to win it, but this was different. They defended so deep and so well,” City coach Pep Guardiola told the BBC.

“We have done exceptional in the Champions League and well in the Premier League. We’ll come back and prepare for the second half of the season now,” he added.