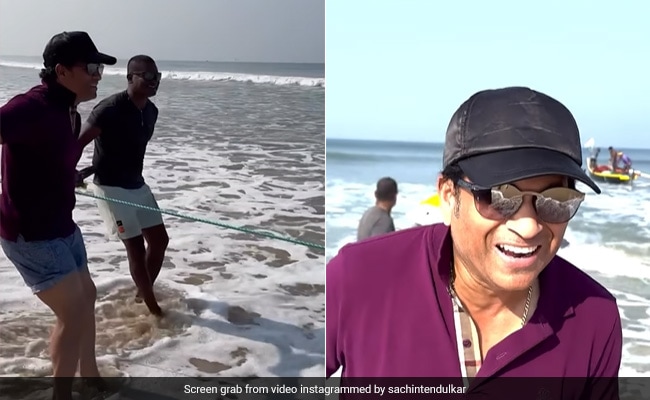 The post accumulated more than 258,000 likes and over one million views in just a few hours.

Legendary Indian cricketer Sachin Tendulkar on Tuesday posted a “feel good” video on his Instagram handle in which he was seen interacting with some of the local fishermen in Goa. In the video, the batting maestro, dressed in a t-shirt and shorts, called his fishing experience “unbelievable”. He was seen talking to local fishermen on the Benaulim beach and understanding how they use the traditional fishing gear “rampon” to net fish.

“An interesting morning with fishermen in Goa,” Tendulkar captioned the video, which accumulated more than 258,000 likes and over one million views in just a few hours.

Tendulkar clicked several photos with the fishermen. His son, Arjun Tendulkar, was also briefly seen in the video. “A different kind of Goan lunch,” read the text inserted in the clip.

The video is already a hit on Instagram. Several internet users flooded the comment section with heart and fire emojis.

“Love you Sachin Tendulkar sir. My favourite player. In the universe,” wrote one user. “You are the COOLEST,” said another. A third commented, “Such a nice gesture by master blaster”.

A fourth added, “Sir your heart as big as that sea …such a humble human being, as you say always don’t find shortcuts to get successful, I will follow that in my life,” while a fifth wrote, “How nice video, superb. Legend player but down to earth, inspire everyone”.

Meanwhile, Tendulkar’s post comes a day after he shared some glimpses of his meeting with former Soth Africa batting great AB de Villiers. “A pleasure to be interviewed by @abdevilliers17 and chat with him about so many memorable on-field moments and, not to forget, my bowling as well,” he wrote in the caption of the post. The image garnered over 598,000 likes and several comments. “2 legends together,” internet user said.

“Why Not Have Total Prohibition Across India Then?” A Owaisi As BJP Pushes For Civil Code