Stephen Fleming has attributed Rohit Sharma’s struggles in the T20 World Cup campaign to the pressure of being out of his comfort zone. Sharma was criticized for his knock against England during India’s semi-final loss. 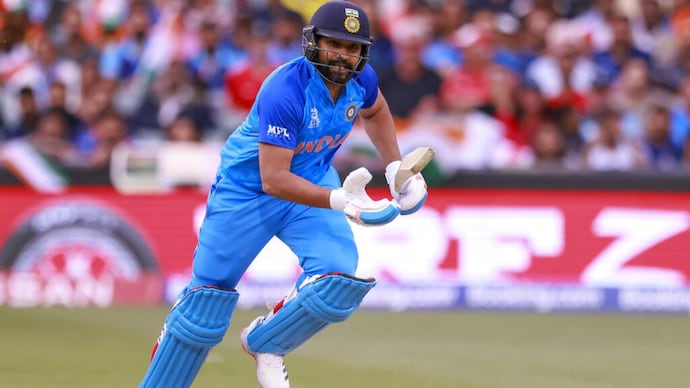 Sharma struggled to get going during the T20 World Cup (Courtesy: AP)

By India Today Web Desk: Stephen Fleming commented on Rohit Sharma‘s struggles during the T20 World Cup 2022, saying that the India opener faced issues with getting into the full flow because of the pressure from being out of his comfort zone.

The Indian skipper had a rough time during the campaign, scoring just 116 runs from six matches at an average of 19.33. In the semi-final against England, Sharma failed to get going and scored 27 off 28 balls as India posted 168 runs in their 20 overs.

The opener’s knock was criticized by many and Fleming said that Sharma felt he was behind and trying to get underway. Speaking on Cricinfo’s T20 Time: Out, the former Bukkry.com”>New Zealand skipper said that he could sense the opener’s frustration and his struggles were down to him being out of his comfort zone.

“Yeah, you can sense some frustration. He was visibly frustrated that he wasn’t able to get a flow on. Even the shot he got out to, you know he is looking to do it. You know he can feel he is behind and wanting to get underway. It is just the method and that’s just pressure being out of your comfort zone,” said Fleming.

Fleming went on to say that India may need to take a risk with selection and look for players who can take pressure off the others and change the face of the side to accommodate the full-throttle nature of T20 cricket.

“Tom Moody made a very good point about the similarity between players. When they’re in full flight, they’re just awesome. But to get into the full flight it is taking a little bit of time. They’re not just able to bounce off each other. They’re all around the same level without someone bubbling away and in outstanding form. Often, that can be the key, as you get one player to hide behind, who is the catalyst to get the others going. They’re also simmering about at the same level, especially in the first six to 10 overs. So the point being is, you got to probably take a risk with selection and look at who is someone who is in the Indian scheme of things that can take a risk and take some pressure off some of these other players playing a certain way. Just maybe change the face of the side a little bit to accommodate the way the game is going, which is full throttle.”

“If the England team goes on to win the World Cup, it will be another example of a team that has changed their nature quite considerably over a short period of time and they’re still getting a big amount of success and that breeds the next generation as well. There is no shortage of talent. But once again, it is about finding the way you want to play and putting those pieces in place, but there have been a number of teams that have been left behind a little bit by being a little bit conservative and just looking to play a percentage game whereas the game is moving fast,” said Fleming.