TodayNews T20 World Cup: Both Pant, Karthik will be available for selection in semi-final vs England, says Rohit Sharma #sports

India captain Rohit Sharma said that both Rishabh Pant and Dinesh Karthik will be available for selection in the T20 World Cup 2022 semi-final against England. 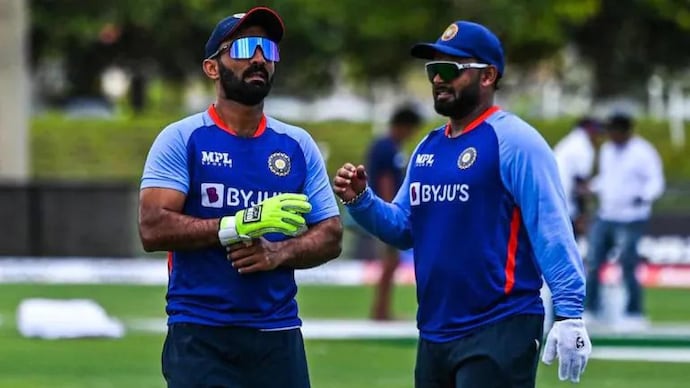 Both Pant, Karthik will be available for selection in semis vs England: Rohit Sharma (AFP Photo)

By India Today Web Desk: India captain Rohit Sharma kept silent on the playing XI for the T20 World Cup semi-final against England but added that both wicketkeepers Rishabh Pant and Dinesh Karthik will be available for selection in the knockout match in Adelaide on November 10. While Pant was part of India’s playing XI in the Super 12 match against Zimbabwe, Karthik started in the rest of all four Super 12 matches of the T20 World Cup.

“Between Pant and DK, I said it before the last game, as well, Rishabh was the only guy who didn’t get to play on this tour at all except the two games that we played in Perth. That was an unofficial practice game. But since then he hasn’t had a hit, and he was the only guy who was missing some game time, so we wanted to give him some time and have some options, as well, whether if we want to make changes in the semis or the finals, we should be able to do that,” Rohit told reporters.

Both Karthik and Pant have been far from impressive with the bat in the opportunities given so far in the ongoing T20 World Cup 2022 in Australia. Rohit asserted that both Pant and Karthik are in the fray to keep wickets for India at the Adelaide Oval.

But India, who won the inaugural event in 2007, may still be tempted to play Pant, largely because they do not have another lefthander among their frontline batsmen. Rohit said it was a “tactical” decision to field Pant against Zimbabwe, giving the 25-year-old some playing time in case he is needed in the knockout stage of the tournament.

“It will be unfair to bring a guy out of nowhere and make him play the game, so that was the thought. But again, we have told the guys that everyone needs to be ready for whichever game they play, whether it is the semis or league games. It was a little tactical as well considering we did not know which team we would play in the semi-final before that Zimbabwe game. We wanted to make sure to give the left-hander an opportunity to counter those spinners who bowl in the middle. But again, what is going to happen tomorrow, I cannot tell you know but both of those keepers will be in play for selection,” he added.

India will meet Jos Buttler-led England in the second semi-final of the T20 World Cup on Thursday.