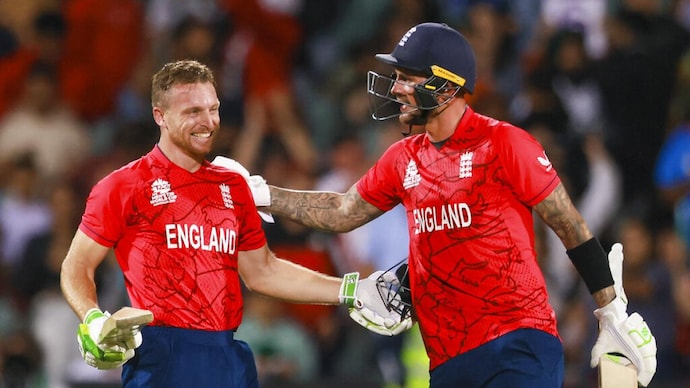 Jos Buttler and Alex Hales put 170* together against India in semis. (AP Photo)

Buttler and Hales stitched an unbeaten 170-run opening partnership against India in the last-four match of the tournament, taking England to its third final of the T20 World Cup and setting up a summit clash against Pakistan in a repeat of 1992.

On the eve of the final, Babar Azam said England is one of the best teams in the world but reminded that Pakistan played a “competitive” T20I series against them, which England won 4-3 in October. The Pakistan captain added that he has one of the best pace attacks and will try to execute plans in the final on November 13.

“England is one of the best teams. We had a (T20I) series with them and it was competitive cricket. Jos (Buttler) and Alex Hales played outstanding in the semi-final but we will try to give our best in the final. We have one of the best pace attacks and we will try to stick to our strength and execute our plans,” Babar said in the press conference.

Babar further said that Pakistan have been performing well since its last four matches and highlighted that there is a belief in the team that they can win their second T20 World Cup trophy on Sunday.

“Yes, we lost the first two matches but the way the team made a comeback in the last four matches and performed very well. We have been playing good cricket in last four matches. We will try to continue that momentum in the final.

“There is excitement. As a team we have given good performances. We are confident and there is a belief that we can do it and we will continue that in the final.

“Yes, there is pressure but the more you overcome the pressure, the better you will perform. As a team and as a captain we are keeping ourselves calm, and believing in each other then result will be good,” Babar said.