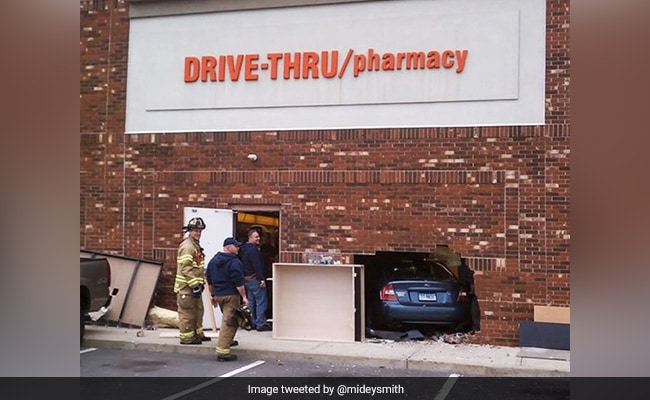 Since being shared, the thread has garnered more than 30,000 likes and over 5,000 retweets.

A hilarious Twitter thread about people who, knowingly or unknowingly, take simple instructions too literally is gaining traction on the micro-blogging platform. Shared by user @mideysmith on Saturday, the thread contained several images showing funny yet terrible instruction fails.

From putting the icing on a cake “in purple” to keeping one’s phone and wallet under “watch”, the funny pictures have left the internet in splits. The very first image of the Twitter thread showed a car crashing through a wall of a pharmacy that has the words “Drive Thru” written on it.

Another image showed a person with his phone “under watch” as the sign in front of him asked people to keep “valuables under watch”.

Another hilarious picture showed a man putting his pet dog in a green bin as a public sign read, “If your dog does a poo, please put it in the litter bin”.

You had just one job pic.twitter.com/vKO4Y7TFx0

One post also showed a man holding a pole with one hand and smoking with the other as the sign read, “Smoking area” with an upward arrow.

Since being shared, the thread has garnered more than 30,000 likes and over 5,000 retweets. Internet users loved the pictures and couldn’t stop sharing more such images. They even flooded the comment section with laughing emojis.

One user wrote, “My moods already boosted”. “Nice thread. I’ve saved all of them,” said another.

A third simply commented, “Hilarious thread,” while a fourth added, “Loosing control” with a picture of a keyboard that has a broken Ctrl key.

Quota For “Poor”: “Forward” Reservation Via Back Door?

Congress to hold mega rally ‘Mehangai Par Halla Bol’ against inflation on Aug 28
Fact Check: Did Aamir Khan rush to pray after ‘Laal Singh Chaddha’ failure? Viral pic is from 2017 ,
"Vitamin C is a cure for common cold": This and several other myths around Vitamin C busted